Exhibition of Marc Chagall’s works is opening on November 16
November 16, 2019 the exhibition «Chagall: Between Heaven and Earth» is opening in the museum «New Jerusalem». The unique project will present 239 works by Marc Chagall stored in museums and private collections of three countries — Russia, France and Belarus. In one space there will be paintings, prints and tapestries of the artist gathered.

The project curator is Ekaterina Selezneva, invited expert in the Marc Chagall Committee in Paris and Honoured Cultural Worker of Russia.

The concept of the exhibition reflects Chagall’s own words: « To me, painting seemed to be some sort of the window which let me fly to the other world ». Marc Chagall believed that he was «born between heaven and earth» interpreting his presence in art and life as existence in a unique dimension. For Chagall there was no gap between the visible and the imaginary, between an object and a symbol, between the specific and the abstract, «all that is his, he carries with him» just like one of his key characters — a wanderer flying above the city with a bag behind that fits all his belongings. « Frankly speaking, I am a man with the only dwelling and a single painting », — assured the artist. 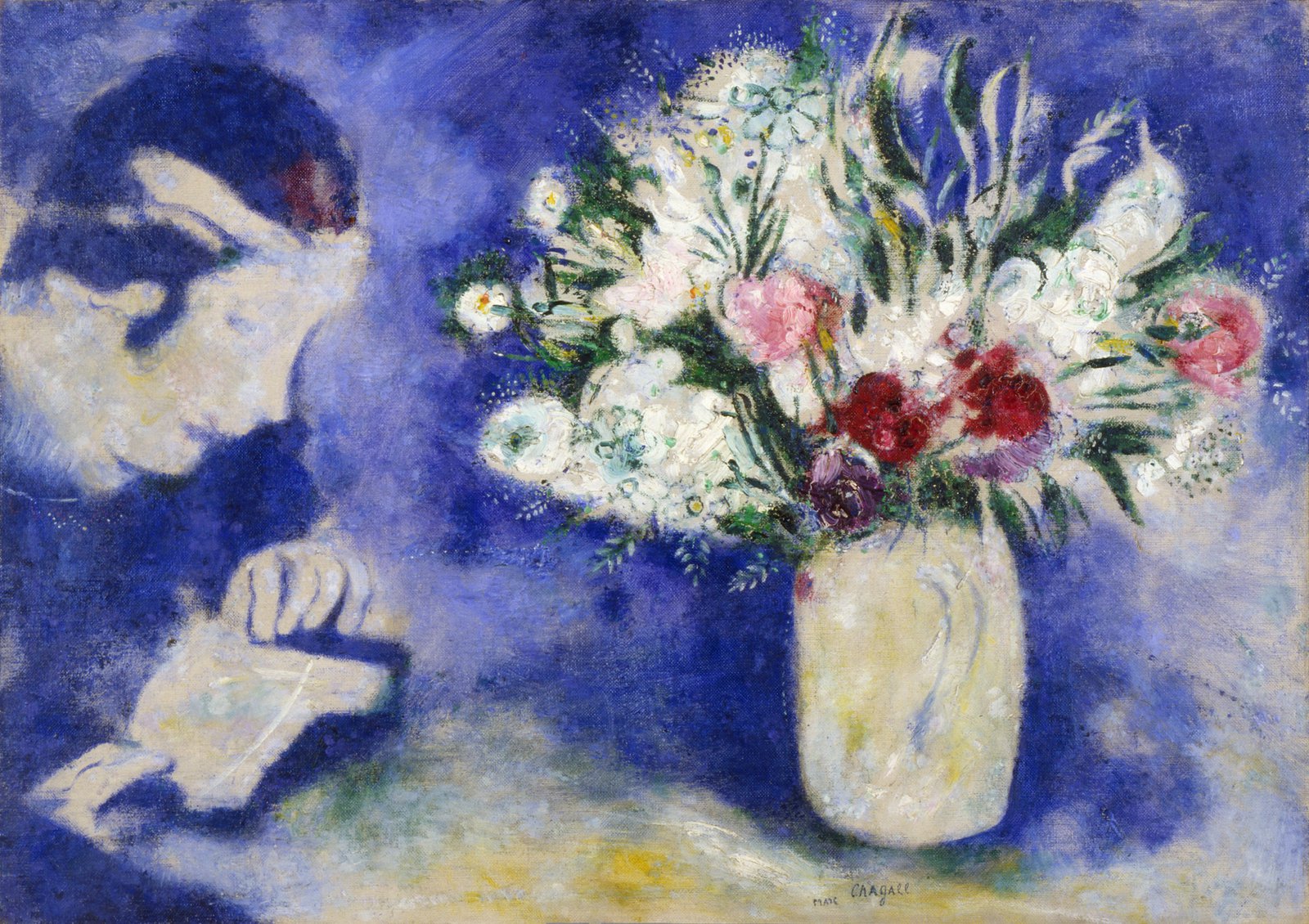 Bella with a Book and a Vase with Flowers, or Bella in Mourillon. 1926. Private collection © ADAGP Paris 2019 Chagall ®

Thus, Chagall created the world that is theatrical, even though many of his contemporaries tended to avoid narration and theatrics in their art. In Chagall’s theatre «earthly scenes» and «heavenly scenes» are performed. Plays are prays and parables, poems and songs, tales and dreams, and other stories that are in tune with the artist’s thoughts. The texts of these «plays» are written with the polyphonic artistic alphabet invented by Chagall which makes him one of the prominent modernists of the 20 century.

« Chagall’s characters are gifted with the ability to fly just like birds or angels. They can be light like true love, weightless like a dream, floating up like a balloon. Living in skies is as common for them as living on earth. Love carried Chagall to other worlds, to close and distant towns and we follow him », — says curator Ekaterina Selezneva.

We were overwhelmed when we learned that the museum «New Jerusalem» was going to reveal to the Russian audience the wide spectrum of techniques used by Marc Chagall throughout his long creative journey. It is what filled his works «with radiant colours and truth». We are hoping to yet again capture the mesmerised gazes of the Russian audience studying the vibrancy of Chagall’s artistic vocabulary — these oceans of looks illuminate our lives today

Visiting Jerusalem in 1931 helped Chagall to justify his idea of overcoming the prohibition against illustration of the Bible that existed in Judaism. The artist bridges the gap between the Jewish traditions and Christian visual art that is based on images. He created sketches for his future biblical paintings and etchings. The 22 sketches are exhibited in Russia for the first time, just as the unique set of 105 biblical prints is; it was coloured by the artist by hand and presented to his second wife Vava Chagall.

The display includes the household and religious items from the collection of the Museum of Jewish History in Russia and luboks and tiles from the collection of the Museum «New Jerusalem» that could have surrounded Chagall throughout his life. The artefacts were choisen carefully, they enormously contribute to the project and explain the roots of Chagall’s art. In the exhibition the real objects become the images in his works.

Search for and discovery of his „own Jerusalem“ unexpectedly across time connects the artist with the place where the exhibition is held today. The New Jerusalem monastery was founded on the outskirts of Moscow in the middle of the 17th century by Patriarch Nikon who intended to create a topographic and architectural copy of the Holy Land. In the 20th century within the premises of the monastery there was a museum established; it moved out of the monastery in the 21st century and started living its own museum life. This New Jerusalem story that developed in a very Chagall-esque way inspired the organisers to talk about religion, life and love engaging Marc Chagall in the conversation, as he managed to combine religious traditions and cultural spaces

Museum and Exhibition Complex «New Jerusalem» is the biggest cultural centre of Moscow Region. Within just a few years New Jerusalem has become the museum hub of the region by presenting to the audience exhibitions of world renowned artists, such as Levitan, Picasso, Durer, Kustodiev, Falk, Faberge and many others. The Chagall’s exhibition is another step to the title of one of the most important museums of Moscow.

The exhibition of Marc Chagall’s works is another international project of the New Jerusalem museum. It’s an opportunity to touch upon the art of the great master and at the same time the result of a long journey that the museum set out on more than a year ago. Thanks to our foreign partners and thanks to the contribution from Marc Chagall’s granddaughters — Meret and Bella Meyer — and the constant personal commitment of the curator Ekaterina Selezneva to the exhibition», we are presenting today a project that will undoubtedly become a major and remarkable event

The exhibition is accompanied with the catalogue that includes articles about Chagall’s life and art, his biography, letters of Marc and Bella Chagall that have never been published before. The publication reproduces all works by Marc Chagall displayed at the exhibition. The exhibition will be open till March 8, 2020.